Home > The 2020s: The space exploration decade with $260 billion invested by governments

The 2020s: The space exploration decade with $260 billion invested by governments

Paris, Washington D.C., Montreal, Yokohama, 14 April 2020 – According to Euroconsult’s latest research, “Prospects for Space Exploration”, global government investment in space exploration totalled nearly $20 billion in 2019, a 6% increase year-on-year. Thirty-one countries and space agencies lead this global investment with the U.S. accounting for 71% of spending. Funding for space exploration is forecast to increase to $30 billion by 2029, driven by Moon exploration, transportation, and orbital infrastructure. Approximately 130 missions are expected over the coming decade, compared to 52 missions conducted over the past 10 years.

“Exploration is the space application of the coming decade. Forecast funding growth of about 50% over the coming decade illustrates government support for large-scale plans that are now materializing, with the Moon as a core focus. Recent announcements – such as NASA’s Plan for Sustained Lunar Exploration and Development and the U.S. Executive Order on Space Resources – reaffirm governments’ ambitions to achieve long-term sustainability in lunar exploration” said Natalia Larrea Brito, Principal Advisor at Euroconsult and editor of the “Prospects for Space Exploration” research. “While the current health and economic crises may impact near-term investment and strategies, they are less likely to disrupt long-term space exploration objectives. The next decade also promises numerous commercial exploration initiatives. This is having a significant impact on the strategic planning of governments in defining the agenda for space exploration. New public-private contractual schemes are taking shape, reflecting the willingness of space agencies to act as both strategic partner and future customer of commercial services to achieve a cost-effective sustainable model for space exploration.” 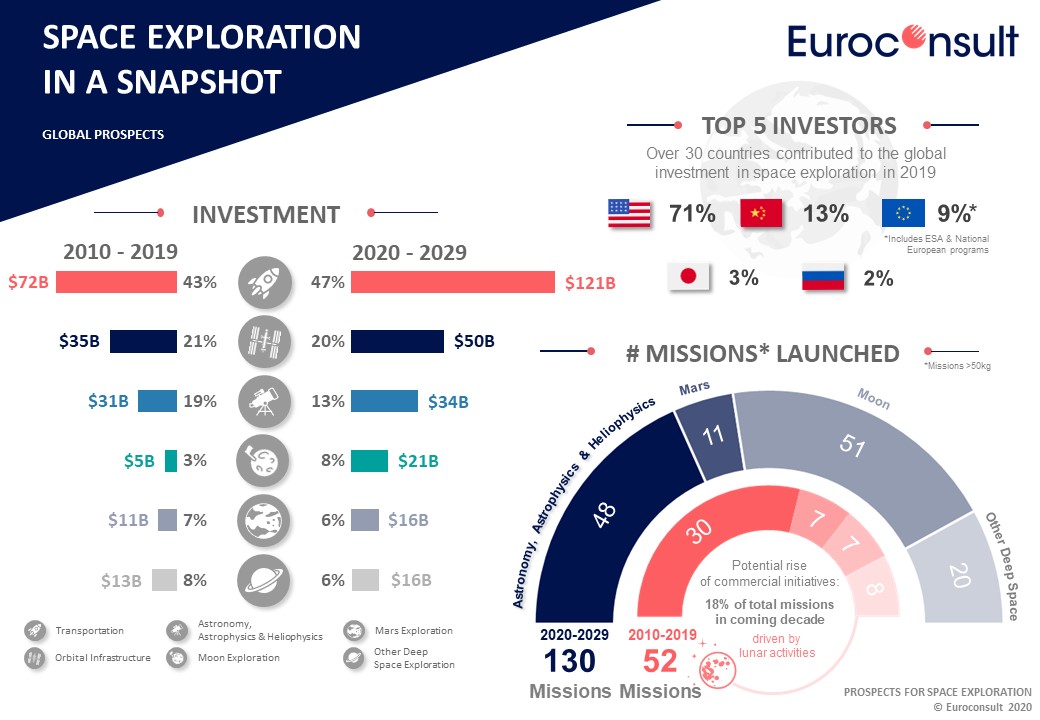 • Transportation is the application area which leads and will continue to lead governments’ investments in space exploration. It is anticipated to increase to $14.2 billion in 2029. Growth will be supported by high investments in multiple countries, particularly in the U.S., to support the development of next-generation crew and/or cargo vehicles for LEO and BLEO activities (including human lunar landers).

• Orbital infrastructure is the second-largest application with $4.4 billion in 2019 driven primarily by the ISS program and increased investments for China’s Space Station. It is anticipated that total world funding will continue to grow, driven by increasing funding for the development of the Lunar Gateway by ISS partners as well as the completion of the Chinese Space Station.

• Moon exploration experienced a high increase in the past two years as lunar exploration has become the central item in the exploration strategy of most agencies moving forward. It is anticipated to experience the highest sustained growth until reaching $2.7 billion by 2029. This will support future robotic government missions and commercial partnership programs.

• Mars exploration totalled $1.4 billion in 2019 driven by three missions planned for launch in 2020 (plus ExoMars being now pushed to 2022). Global funding is expected to drop as Moon programs shall be favored first. New investment cycles are expected in the second part of the decade to support plans such as Mars-sample return missions.

• Other deep space exploration programs have grown until reaching $1.8 billion in 2019 to support the development of multiple missions in the near-term (primarily from the U.S., ESA and Japan). Global funding is anticipated to reach $1.6 billion/year to support the various planned missions, including potential first endeavours from India and Russia.

• Astronomy, Astrophysics & Heliophysics programs reached $3.6 billion in 2019, currently in a peak phase to finance major flagship programs. This field will continue to be an essential application area for space agencies worldwide.

• Regarding missions, Moon exploration will dominate with close to 40% of all missions planned, reflecting the fact that lunar exploration remains the focus of stakeholders’ space exploration strategy. Commercial missions are forecasted to account for 18% of all missions to be launched in the decade, primarily driven by lunar initiatives.

The 2nd edition of “Prospects for Space Exploration” provides an economic and strategic assessment of the space exploration sector, including an analysis and benchmark of government and commercial space exploration programs worldwide. This essential tool is available now and can be ordered from the Euroconsult shop.