Paris, Washington D.C., Montreal, Yokohama, 29 March 2021 – In its first ever report on Universal Broadband Access, Euroconsult, the world’s leading authority on space and satellite-based applications markets, forecasts that the global market for satellite broadband is expected to triple with service revenues reaching $12.7 billion by 2029. With 46 percent of the world’s population still unconnected, satellite broadband remains key to bringing essential services to sparsely populated regions where extending terrestrial networks is not economically feasible.

Significant progress has been made to expand access and adoption of broadband services as demonstrated by the growth in internet users, which doubled between 2010 and 2020, to just over 4 billion users worldwide in 2020. The Covid-19 crisis has highlighted the importance of universal broadband access and accelerated efforts towards bridging the divide between those with high-speed broadband access and those without connectivity.

“Organizations such as the Broadband Commission for Sustainable Development set targets to encourage governments to invest in programs that contribute to bridging the digital divide,” said Dimitri Buchs, Senior Consultant at Euroconsult. “Overall, the broadband ecosystem will be central to building the post COVID-19 world, notably by making sure universal equitable access to broadband services is part of the new normal. We have a long way to go to achieve this, but satellite will be key to reaching many who are currently unserved or underserved.”

There are three categories of satellite solutions that address the Universal Broadband market. They include: consumer broadband, Wi-Fi hotspots, and cellular backhaul. Consumer broadband is currently the dominant option in advanced economies while Wi-Fi hotspots are most frequently used in less developed regions, notably due to the lower cost of services and the ability to share costs among a large number of users.

The Euroconsult research found that in 2020, 43 million people were connected to broadband via satellite, roughly one percent of the world’s connected population. This number is expected to grow to 110 million in 2029, with Latin America adding roughly 20 million users and Sub-Saharan Africa adding 16 million. 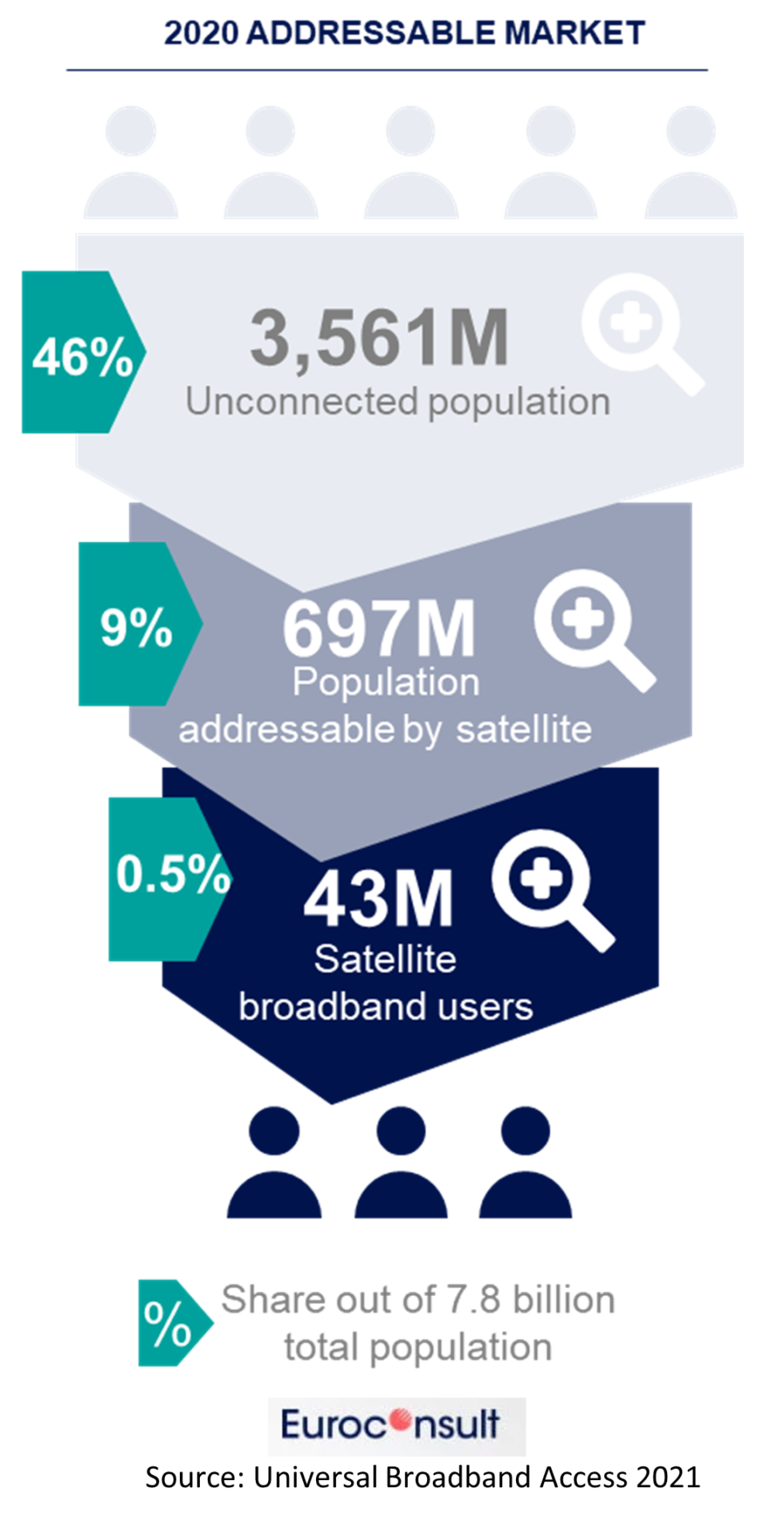 The growth, in part, will be driven by an influx of new lower cost capacity with LEO constellations, such as Starlink, Amazon Kuiper, OneWeb and Telesat Lightspeed and several Very High Throughput (VHTS) GEO satellites coming into service. This will be key to the development of the Universal Broadband Access market as all three segments have relatively high price sensitivity.

The improved economics enabled by lower capacity pricing are expected to drive higher data rate service to existing satellite broadband users, while also unlocking new opportunities in rural and remote regions as well as in areas just outside of urban centers that have less than adequate service. HTS systems are, for example, required for the use of satellites to support 5G network deployments.

“The Universal Broadband Access market offers significant growth opportunities to the satcom industry whose revenues have been on a downward trend since 2014,” said Dimitri Buchs. “During this period, this market has been one of the few bright spots for satellite operators, with revenues increasing every year.” The market should remain dynamic in coming years, with capacity revenues expected to more than triple to $4.8 billion by 2029.

The first Universal Broadband Access report from Euroconsult is a complete analysis and forecast of the satellite broadband market. It includes a detailed discussion of the addressable markets, a strategic analysis of the economics and opportunities, a comprehensive market assessment, and a market forecast through 2029 with trends and forecasts broken down by region and vertical market.
Premium content is also available with detail on key macroeconomic indicators by country, and detail on the number of satellite terminals installed by country, including consumer broadband subscribers, number of Wi-Fi hotspots, and number of cellular backhaul sites.

The Universal Broadband Access research from Euroconsult is an essential tool for satellite operators, investors, and telecommunication and mobile operators who need to understand the opportunities for growth based on global trends and forecasts. It focuses on two time periods with five years of historical trends and forecasts to 2029 with Excel databases, including hundreds of data points for each of the market segments. It is now available for download from the Euroconsult store.