Paris, Washington D.C., Montreal, Yokohama, 8 April 2021 – The latest update of “Prospects for the Small Satellite Market”, was released this week by Euroconsult, forecasting further growth in the global supply and demand of government, commercial and academic satellites weighing up to 500 kg. The market intelligence report, now in its 7th edition, builds upon Euroconsult’s previous iteration that accurately predicted more than 1,000 satellites would be launched during 2020, a record year despite COVID-19. The new release further reinforces the sentiment that the 2020s will be the decade of small satellites, anticipating the launch of close to 14,000 smallsats before 2030.

The main driver for this continued growth during a time where many face pandemic-related challenges is plans for satcom broadband “mega-constellations” and the continuous necessity for replenishment launches. Of all smallsats to be launched, 84% are expected to be part of constellations. Furthermore, the smallsat manufacturing and launch market are set to do more than triple over the next decade, to $35 billion and $19 billion respectively, driven by the multiplication of constellation projects from both commercial and government stakeholders. Euroconsult, who operate from locations across North America, Europe and Asia and specialise in the space sector and satellite enabled verticals, have released their updated findings at a time when launch rates are at least on par with last year, suggesting that the era of the mega-constellation has truly arrived.

Flagship examples of low earth orbit (LEO) broadband constellations, such as SpaceX’s Starlink and Amazon’s Kuiper, account for almost half of the projected demand over 2021-2030. Readers are therefore advised to go beyond raw numbers as vertical integration keeps growing with numerous players seeking to manufacture, operate and launch their own smallsats. Significant future market shares are now captive of a region, country or of an integrator and/or launch provider, challenging both commercial satellite integrators and launch providers which see more of their target customers not only leaving their addressable market, but also competing with their own services. The smallsat market is however more open to procurement from third parties at the subsystem level than at the satellite level.

The updated report, free extract available, comes with an option to access premium features, including Euroconsult’s Smallsat Constellation Database that covers extensive past, current and future data – the first time Euroconsult have ever shared their “secret ingredients” with customers.

Alexandre Najjar, Senior Consultant at Euroconsult stated, “Our smallsat report is once again in high-demand and with major intelligence updates being drawn from post-pandemic data and reviews of key pricing models and satcom application forecasts, plus the inclusion of Space Logistics information that features In-Orbit Servicing, Debris Removal, Last Mile Logistics and In-Orbit Manufacturing, we believe this report will be invaluable to key industry stakeholders and investors.” Najjar added, “A plethora of new market insights include the mitigation of concerns around the impact of COVID-19 in our previous edition by an increased availability of capital for the space sector, most notably with the recent M&A and SPAC funding trend.” 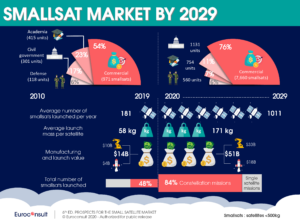 Other valuable updates to Prospects for the Small Satellite Market include a reviewed and refined pricing model for manufacturing and launch prices, while satellite applications in the database have been rebalanced, most notably with regard to Information, Earth Observation and Security applications. The Euroconsult report incorporates new content to help give decision makers key knowledge in this area, as well as a reviewed and up-to-date forecast accounting for the economic situation and impact of COVID-19. With its increasing importance, the extensive Euroconsult database has been updated to reflect the significant growth and developments of the Chinese constellations, with input from Chinese-speaking stakeholders.

This publication includes extensive data points on units, mass, and value for manufacturing and launch services. It provides a forecast for the next decade broken down by application, orbit, operator type, mass category, operator region, as well as integrator and launch provider, type of integrator, type of launcher and other subsets. It has now been added to the Euroconsult shop alongside a portfolio of high-demand space sector research that includes the 24th edition of Satellites to be Built & Launched and the 8th edition of Euroconsult’s Space Economy Report.

About the report
“Prospects for the Small Satellite Market” provides an in-depth analysis of market drivers, supply and demand and provides information on seven different smallsat applications, six types of orbits and four mass categories with a major review of telecom mega-constellations. Space Logistics is featured as the latest application category including In-Orbit Servicing, In-Orbit Manufacturing, Last Mile Logistics, and Space Debris Removal. The report includes a comprehensive review of smallsat (<500 kg) constellations and operators, including a review of China smallsat stakeholders and of the Space Development Agency’s National Space Defense Architecture layers.

An essential tool for manufacturers, launch service providers, space agencies and investors, the research provides thousands of data points and expert interpretation of their impact on specific verticals and sectors of the smallsat value chain. Forecasts are based on data derived from over 30 years of tracking the satellite/space value chain together with dozens of dedicated industry interviews and information derived from company press releases and financial filings. Prospects for the Small Satellite Market is available now and can be ordered from the Euroconsult shop.