Paris, Washington D.C., Montreal, Yokohama, 15 December 2020 – Amid a tumultuous year for the global economy, government space program budgets maintained their growth trajectories for a fifth consecutive year. Following a period of strong budget tensions between 2010 and 2015, government space sector spending reached its highest recorded point in 2020 according to Euroconsult’s latest “Government Space Programs: Benchmarks, Profiles & Forecasts to 2029”, flagship research. With Covid-19 having no noticeable impact on government space budgets, the pandemic having occurred with budgets largely already decided, it remains however to be seen, whether governments can sustain these historic budget levels in the future.

For the 10th year in a row, civil budgets expansion has outpaced military ones, totaling $50.2 billion in 2020, representing 61% of total global spending,10% higher than in 2007. Civil space budgets growth is boosted by the proliferation of new market entrants, ambitious space exploration and manned spaceflight programs and the appeal of a booming commercial market incentivizing governments to invest to help national industries capture a piece of this market.

Defence budgets are cyclical in nature, with the US continuing to dominate spending at 75% of the world total, though other countries are increasing their investments, notably in China, Russia and France, though with rising contributions from civil powers such as India. Government defense space budgets are driven by the current global upcycle phase, the strong emphasis on space security in all leading space nations—with a marked interest in SSA by leading and emerging space countries—and a generalized trend of the militarization of space. 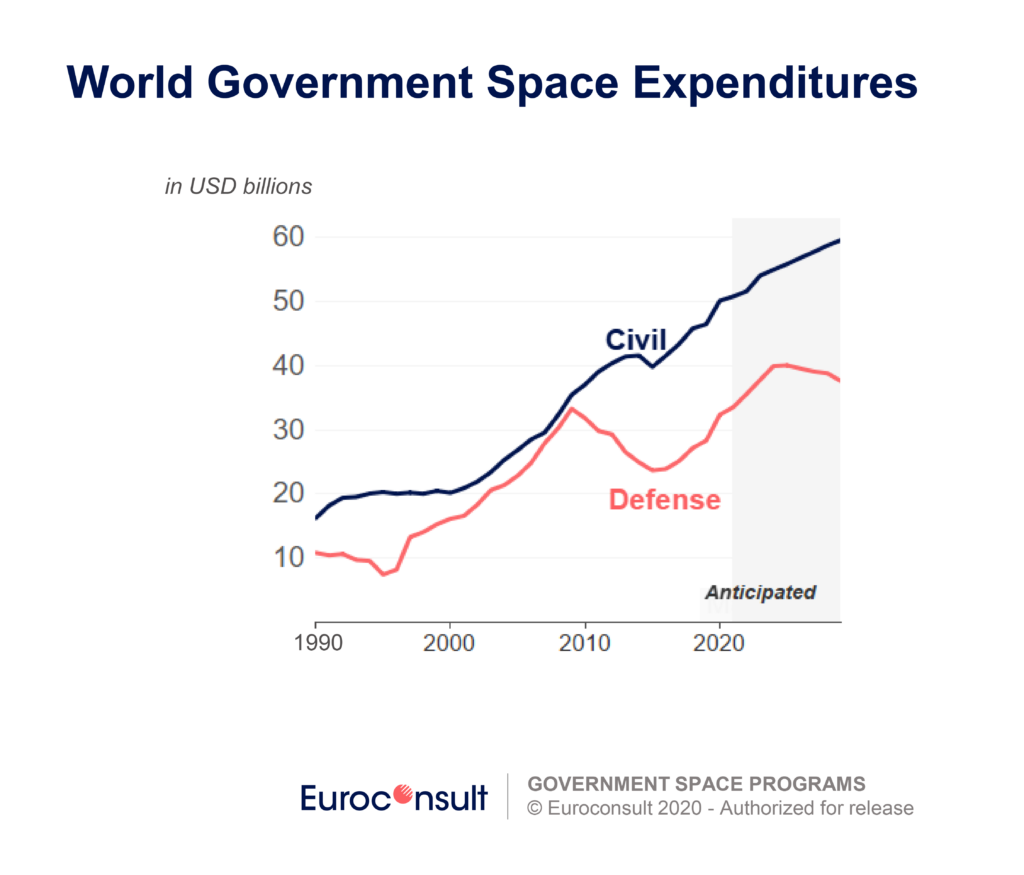 “Contrary to cyclical defense space budgets, civil spending is more prone to external shocks, such as economic crises, drops in oil prices and shifting government priorities. Although we have witnessed record-breaking space budgets in 2020, their sustainability remains an open question in the current global economic context. Whether emerging space nations will continue their commitment to national space policies and strategies or divert investment elsewhere is something that we’ll keep monitoring closely. And we can now provide our clients with fresher data faster thanks to our new digital platform, which is updated every quarter,” commented Simon Seminari, Euroconsult Principal Advisor and Editor in Chief of Euroconsult’s Government Space Programs research product.

While the US continues to be the world’s largest investor in space at 58% of the world total, with China, France, Russia and Japan following in that order, the share of the top 5 space counties investing in space has decreased to represent just 81% of the world total, down from the top 5 accounting for 93% of total spending 20 years ago. The US budget for space in 2020 totalled $48 billion, whilst China continued to maintain its second-place ranking, with an estimated $8.9 billion budget, representing an approximate threefold increase since the early 2000s. France has also continued to increase its space budget, topping European national spending to overtake Russia as the third largest investor with a $4 billion budget envelope dedicated to space in 2020.

The socio-economic benefits from space assets, as well as the rapid development of commercial space markets, has resulted in a growing number of countries investing in space. However, despite this trend, the gap between emerging and mature space powers has grown significantly over the last decade, and threatens to grow even larger in the next, especially as the Covid economic fallout might force emerging countries to re-evaluate, cancel or postpone their space investments in an effort to shore up their public finances.

In terms of space applications governments invest in, at $13.2 billion, manned spaceflight overtook Earth observation’s $11.7 billion as the highest-funded application in 2020, spurred on by ambitious missions in the US (Artemis), China (Chinese Large Modular Space Station) and India (Gaganyaan), as well as large investments by ESA, Russia and Japan, amongst others. According to the research report, Space Science and Exploration is now the third-highest funded application by governments, with next-gen orbital infrastructures and high-cost space exploration missions, including three which launched for Mars in 2020, largely driving civil space budget growth.

A number of competing forces make forecasts challenging. The Covid pandemic-related economic fallout is likely to put pressure on government budgets. If commercial space markets fail to live up to expectations, governments risk becoming disillusioned at their returns on investment and may seek to funnel money into other, more fruitful sectors. However, most mature powers have committed themselves to ambitious, multi-annual space exploration and manned spaceflight programs, making it difficult to draw down investments, and the growing militarization of space should also sustain investments.

About the research
The latest edition of Euroconsult’s flagship “Government Space Programs: Benchmarks, Profiles & Forecasts to 2029” provides an extensive view of the economic, policy and programmatic trends of government space programs with a strategic outlook containing global trends, forecasts and benchmarks by country, region and application. It includes a comprehensive analysis of current and future trends in space applications globally, by country, and by region with detailed analysis of the world’s top 10 space programs and complete profiles of all 90 governments (including the EU, ESA and EUMETSAT) currently investing in space.

Government Space Programs: Benchmarks, Profiles & Forecasts to 2029 is the first Euroconsult research product to transition to a new fully digital format, allowing customers to actively interact with Euroconsult’s proprietary data according to their needs and interests. Intuitive and flexible, content is updated quarterly to help users stay ahead and improve their strategic market foresights.

The 2020 edition of the “Government Space Programs: Benchmarks, Profiles & Forecasts to 2029” is available now and can be ordered from the Euroconsult e-Shop.